Our site team at 71/72 Kingsway is making excellent progress on the development.

Recent drone footage shows the two tower cranes now in action at this new office scheme being constructed upon the site of the former Oceana nightclub. The foundation works are now well underway at the development, which will include will include 114,000 square feet of commercial floor space with flexible co-working and office opportunities for businesses in sectors like tech, digital and the creative industries.

71/72 Kingsway forms a key part of the council’s wider sustainability strategy and includes some innovative features to ensure it is carbon zero in operation. Due for completion in the summer of 2023 and aimed at keeping young business talent in Swansea and creating more city centre footfall, the scheme, once complete, will be worth £32.6m a year to the city’s economy.

The building is situated on an active travel route, minutes from the city’s main bus and rail stations. Recent improvements on The Kingsway have facilitated Swansea’s push for more carbon neutral ways of travelling, providing wide walkways and cycleways leading off the development. There will also be a bus stop immediately outside the building.

John Boughton, Managing Director of Bouygues UK in Wales and the West, said: “We’re delighted that the construction of 71/72 Kingsway -a key part of the history and infrastructure of Swansea –is progressing so well. We’re proud that the finished building will operate at net zero with a range of sustainable features, an ambition we hope to achieve across our builds.

“There is a big demand for high quality, sustainable office accommodation and this landmark building will help regenerate the area and local community. The mix of commercial and office space is going to be a huge asset to the city.”

Cllr Rob Stewart, Swansea Council Leader, said: “The council and our partners are investing over £1bn to regenerate Swansea city centre for the benefit of our residents, businesses and visitors, and these aerial photos show several projects which are either complete or on-going.

“As well as the improved look and feel of Kingsway and Swansea Arena in the backdrop, the images also show even more progress at the former Oceana nightclub site, where foundation works are continuing ahead of a start on the main building’s construction.”

Developed by Swansea Council, the 71/72 Kingsway scheme is part-funded by the £1.3bn Swansea Bay City Deal and supported by the European Regional Development Fund through the Welsh Government. 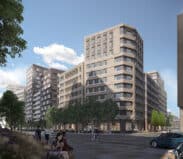 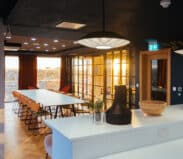 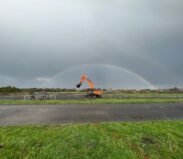